The union participated in 18 events throughout New York City, including six in Queens. Overall, they distributed 2,500 turkeys totaling more than $75,000 donated this Thanksgiving.

Union carpenters and contractors kicked off this season of giving with Queens Borough President Donovan Richards at the NYCHA Queensbridge Houses. They continued their volunteer efforts at the American Legion Post 483 with the help of Council Member Selvena Brooks-Powers. On November 19th they hosted three events across Queens in partnership with Council Member Nantasha Williams, Council Member Francisco Moya and Council Member Julie Won. The final event was put on with the help of Senator Jessica Ramos IS 145Q in Jackson Heights. The efforts are a part of the union’s long-standing tradition of building up New York communities.

“Every year it makes me so proud to see our members show out in numbers to help the members of our community in need around the holidays,” stated New York City District Council of Carpenters Executive Secretary-Treasurer Joseph Geiger. “Queens is home to so many of our members throughout the District Council, so we are grateful to be able to do our part to give back alongside our elected leaders. The holiday season is a joyful time but can also be a source of stress for many, and we are happy to be able to provide some relief to those members of our community who are struggling.”

“The Thanksgiving meal is a time-honored tradition for all of us as Americans, as we gather with our loved ones and give thanks for the blessings in our lives. But with food insecurity still a very real threat in our borough, far too many families face the prospect of not being able to put that meal on the table this holiday season,” said Queens Borough President Donovan Richards Jr. “I’m deeply grateful to the Carpenter Contractor Alliance of Metropolitan New York, who donated 100 of the 500 turkeys my office distributed to needy families around Thanksgiving. Despite all we’ve been through, Queens has much to be thankful for, and all our families deserve to be able to fully take part in this wonderful holiday,” said Queens Borough President Donovan Richards.

“I was grateful for the opportunity to work with the union carpenters and contractors to give back to our community this holiday season. There are so many people in the community that are struggling this time of year and it is important that we all remember to do our part to support the people in our community who need help,” said Council Member Selvena Brooks-Powers.

“Giving back to your community is always important, but during the holidays I make sure to make it a priority. Everyone deserves to have a meal on their table for Thanksgiving, and it is so rewarding to be able to help the community in these small ways,” said Council Member Nantasha Williams.

“The Carpenters union steps up each and every year with these Thanksgiving drives and I am grateful for their partnership in ensuring that all the families in my community have a warm meal. Partnerships like this are essential for my community,” said Council Member Francisco Moya.

“The holiday season is a joyful time but can be stressful for many of our neighbors who are struggling to put a meal on the table. Thank you to the carpenters union for putting together so many events to help our community enjoy Thanksgiving with their families,” said Council Member Julie Won.

“I am thankful to have been able to provide some relief to the families that came out to our Thanksgiving Drive this year. Thank you to the union carpenters and contractors for their dedication to giving back to their neighbors in Queens,” said Senator Jessica Ramos. 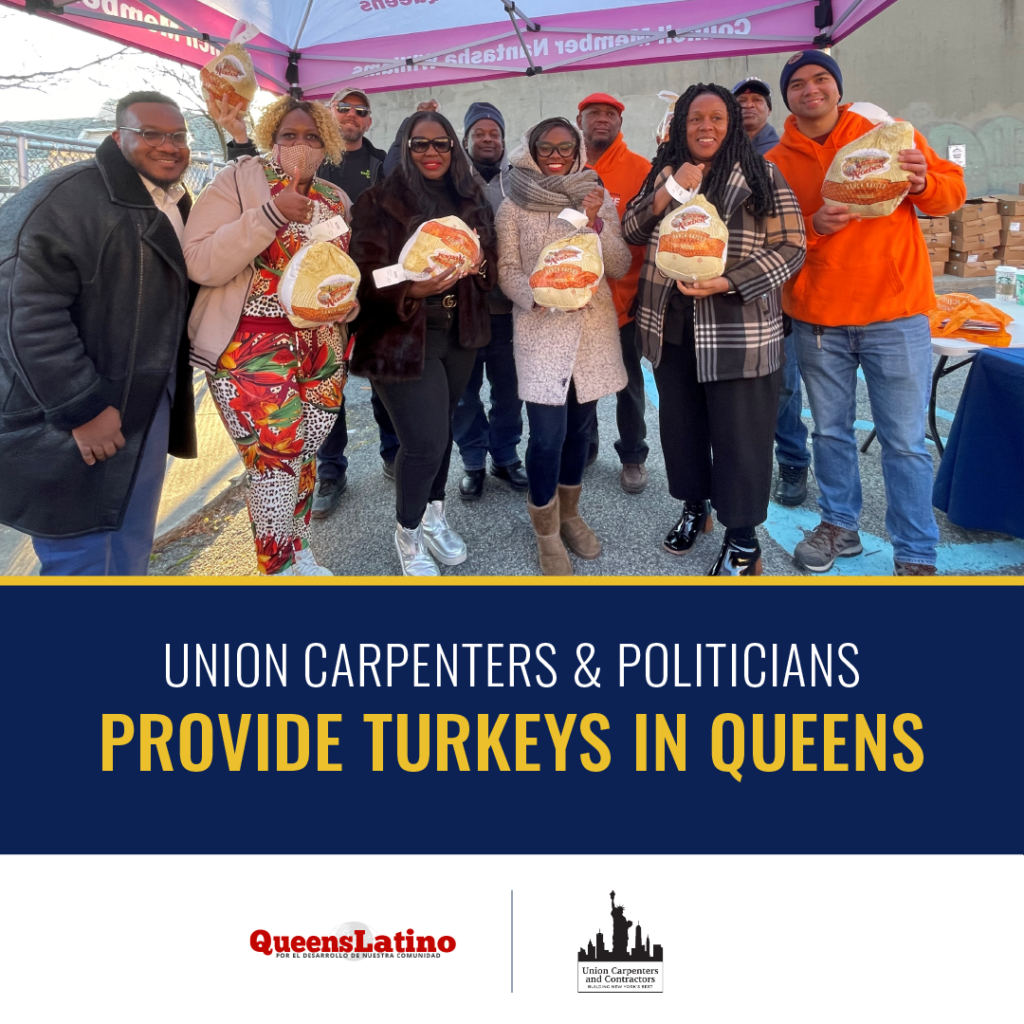