The union participated in 19 events throughout New York City, including 6 in the Bronx. In total, union carpenters and contractors donated approximately 2,400 turkeys and warm meals this Thanksgiving.

Union carpenters and contractors began their volunteer efforts with Council Member Diana Ayala at the Moore Houses, then went to The Bronx River Houses and Monroe Houses with Assembly Member Kenny Burgos, then worked alongside Senator Jamaal Bailey at his district office, they continued donations at Stevenson Commons with Assembly Member Karines Reyes, Co-op City with Council Member Kevin Riley, and finished their efforts with Speaker Carl Heastie at his district office.

“Giving back to the communities in which we live and work has always been a guiding value of union carpenters,” stated New York City District Council of Carpenters Executive Secretary-Treasurer Joseph Geiger. “Union carpenters are devoted not only to building a state-of-the-art skyline, but building New Yorkers up, especially during times they need it most. I am proud of the countless union volunteers that showed up for their communities to ensure that their neighbors and fellow New Yorkers did not go home hungry. Our union is grateful to have strong partnerships with Carpenter Contractor Alliance of Metropolitan New York and elected officials like Senator Jamaal Bailey and Assembly Speaker Carl Heastie who have all helped make these Thanksgiving turkey drives possible.”

“The NYC Carpenters Union has been a tremendous partner in the work to combat food insecurity and hunger in our communities. I want to extend my heartfelt thanks to their members for stepping up to make the holidays a little brighter for our families throughout the district, especially our neighbors struggling with hunger this holiday season. Thanks to their generosity and dedicated efforts, countless families will have turkeys for Thanksgiving,” said Senator Jamaal Bailey.

“I am always humbled to work alongside the resilient and charitable members of the New York City & Vicinity District Council of Carpenters and the Carpenter Contractor Alliance of Metropolitan New York,” said Assembly Speaker Carl Heastie. “These workers have seen first-hand how difficult the pandemic has been for communities in the Bronx. I’m honored to partner with union carpenters and contractors to do our part and give back to New Yorkers this Thanksgiving.” 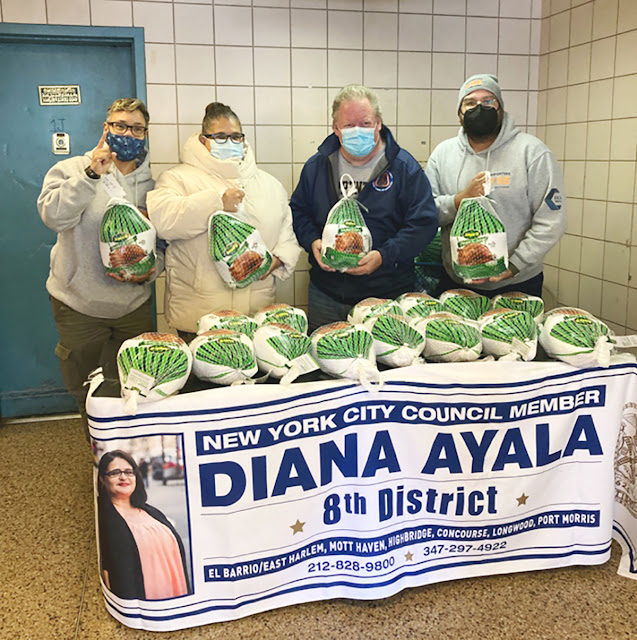