Union Carpenters and Contractors Donate Over 1,000 Toys and 500 Turkeys to Families in Need All Across New York City This Holiday Season

Bronx, New York – This month, the New York City & Vicinity District Council of Carpenters and the Carpenter Contractor Alliance of Metropolitan New York delivered over 300 toys to kids and 500 turkeys to families throughout the Bronx this holiday season. Partnering with local elected officials and community organizations, the union carpenters and contractors of New York participated in three toy drives and one turkey drive throughout the Bronx in addition to events across all five boroughs. As COVID-19 has upended the lives of so many in New York City, union carpenters and contractors do their part to give back.

Across New York City, union carpenters participated in ten toy drives and one turkey drive in an effort to alleviate stress on families this holiday season and to spread holiday cheer.

The annual toy drives come after the New York City & Vicinity District Council of Carpenters and the Carpenter Contractor Alliance of Metropolitan New York teamed up last month to deliver turkeys, food and other goods to families in need for Thanksgiving.

“Union carpenters and contractors have seen first-hand how hard this year has been on the people of New York City. That’s why we felt it was so important this year especially to be out there giving back to our local communities this holiday season,” stated Executive Secretary-Treasurer Joseph Geiger. “We have the best members and they’re happy to be out in the Bronx, working with our partners to help make the holidays a bit brighter for folks.” 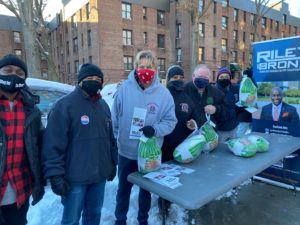